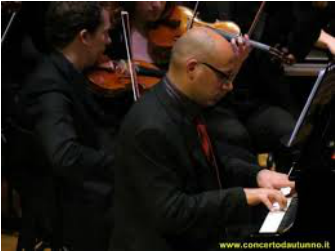 LINK:
http://www.carlogizzi.com/
Beginning his studies in 1989 under the guidance of the teachers Fernanda Pompili and Maurizio Angelozzi he then graduated from the Conservatory “L.Refice” in Frosinone in 2003, under the guidance of Antonio Saracino. In 2007 he obtained with excellent grades a diploma of the II° level in modern piano music from the same Conservatory under the guidance of the teacher Carlo Negroni, presenting as a thesis the piano reworking of the album "Dark Side of the Moon" by Pink Floyd. In this same year he was admitted to the Conservatory for the Composition course with the teacher Luca Salvadori. In 2004 he specialized after attending the masterclass in composition and arrangement held by the internationally renowned guitarist Maurizio Colonna and in 2007 he attended the seminar held by the jazz guitarist Amit Chatterjee. His concerts range from classical European music, Indian Music to jazz and pop: he has played numerous concerts as a soloist and chambre ensemble and has participated and won several National competitions. Since 2003 to 2010 he has worked in the tours of the singer Tony Santagata and collaborated with the violinist Stefania Urli offering a repertoire of classical, jazz and film music. From 2005 he played in the Caumma Trio Jazz together with Massimiliano Ottaviani and Umberto Belli offering jazz and original songs, performing in several important events in Lazio performing at the Muse Theatre in Roma and at the Savelli Castle in Palombara S." As a soloist he participated in the “Musica insieme” event in 1998, 2003 and 2007 with several important musicians as Tony Santagata, Edoardo De Angelis, Claudio Lolli Ede Ivan, Patrick Edera, etc.

From 2006 he played in the orchestra of the comedian Michele Balzano performing at various events in southern Italy. In March 2006 he performed in the show of poetry “Reflections of sound poetic images” of the Polenta sisters at the “Casa del Jazz” (House of Jazz) in Rome. From 2007 to 2011 he played regularly as a soloist in the concert season of "I concerti del Tempietto" (Concerts of the Temple) at the Theatre Marcello and Villa Torlonia in Rome. In the same years he performed regularly as part of the Stagione Concertistica Narada. He collaborated with other artists in 2007 for the music of the show of the "William Blake's Divine Humanity" from the theatre company "T.E.V. Theatre of Eternal Values" founded by Shri Mataji Nirmala Devi and represented at the New Players Theatre in London.
In 2008 he releadsed a CD edited by TERRE SOMMERSE where he improvised on themes of Bach, Mozart and Pink Floyd and he performed at the Baldini Hall in Rome for the concert season "TERRE CLASSICHE". He recorded for Radio RAI INTERNAIONAL for the program " TACCUINO ITALIANO". He attended as a pianist at the Vilamba's " Bellavita Tour 2012" with the folk band Vilmaba in Munich, Milan, Basle, Londoon, Erlangen, etc with artists as Johan Freget, Santa Cecilia, Marie Joelle and Shava